Mount Isa, mother-of-three dying from skin cancer, shares her heartbreaking story to warn others about the importance of getting regular skin checks from a skin specialist after her GP misdiagnosed her mole as non-cancerous

With her bright smile and bubbly personality, you would be forgiven for thinking that Mount Isa woman, Terri Grosser, doesn’t have a worry in the world. The more you get to know Terri, the more you see behind the bright smile, a woman showing incredible strength in the face of death, fighting for more time to make memories with her loving husband and three children. 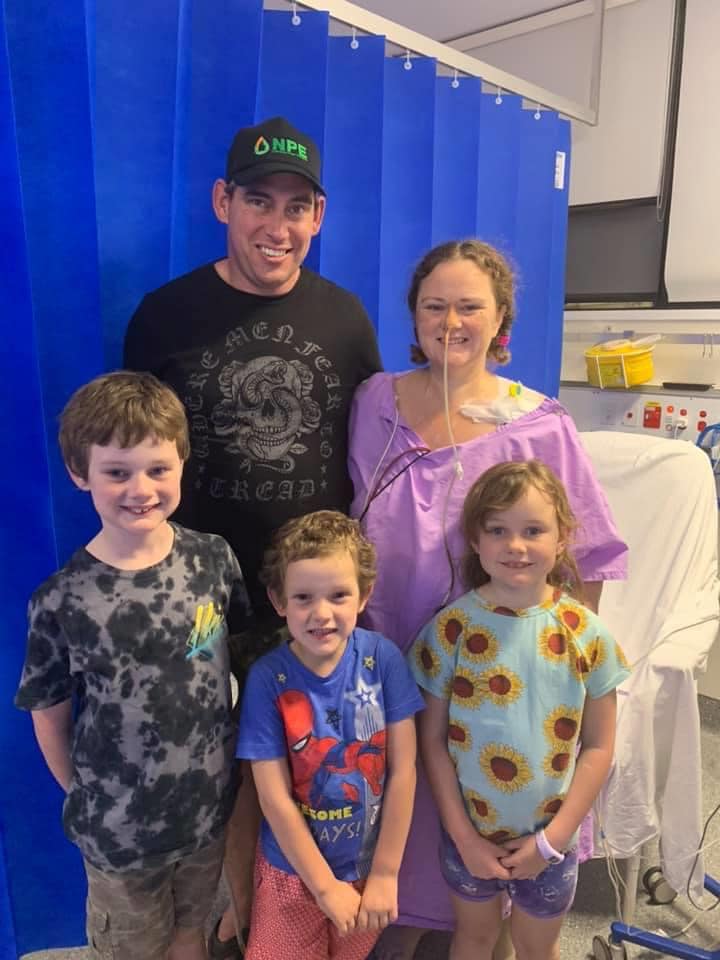 In 2016, when Terri was 35, she noticed an unusual mole on the back of her leg and booked an appointment to see her GP.

“My GP said it was nothing to be concerned about and reassured me it was a certain type of mole that didn’t get cancer,” she said.

A couple of months later, the mole began to itch and bleed.

“It was very irritating, and I just decided I wanted to get it off,” she said.

“My GP removed the mole and called me back three days later when my biopsy results came back, to tell me it was melanoma.

Her GP said melanoma would require treatment and surgery.

“My GP said, ‘hopefully, we’ve caught it early enough, so it’s not serious’, but I wouldn’t know until I had surgery,” she said.

“Even then, I still thought it would just be a small procedure where they’d take a small ice-cream scoop out of my leg, and I would be on my way.

“Post-surgery, I woke up with a 20-centimetre long scar that went 8-centimetres deep. Part of the surgery also included testing my closest lymph nodes to see if the melanoma had spread.

“Unfortunately, for me, it had spread to my first two lymph nodes,” she said. 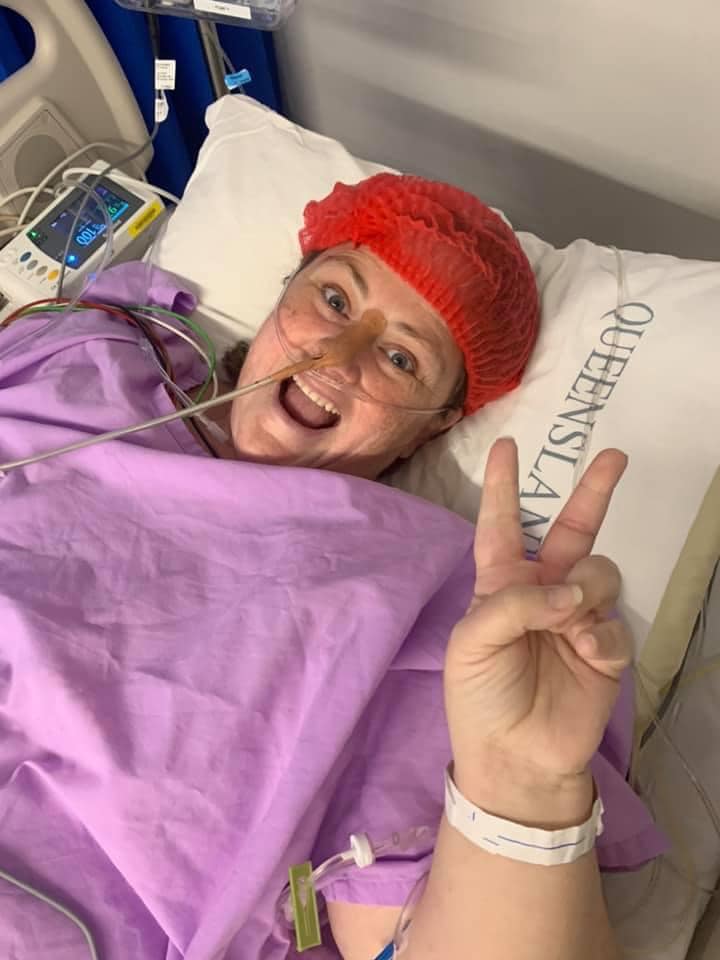 “There’s no treatment or cure for that. I was given a terminal diagnosis with options for prolonging life,” she said.

“So they cut everything out; it was another massive surgery, and I ended up with over 100 staples and stitches.

“At the time, the kids were two, three and four, and after the surgery, I was actually clear of cancer for a year.

“But, the cancer came back in fourteen new places, some on my skin and some under my skin. That’s when I met the ladies at the Mount Isa Hospital’s Cancer Care Unit, where I had two years of immunotherapy, which is like chemotherapy to prolong my time.”

Immunotherapy gave Terri two and a half years cancer-free until she was admitted to hospital in August this year with stomach pains.

“I was admitted for emergency hernia repair surgery. When I woke up, I was in the Intensive Care Unit and was told my suspected hernia wasn’t the root cause of my issues,” she said.

“The surgeon had found three large cancerous tumours obstructing my bowel. So, my bowel was cut and rejoined in three places; now, I have a 30cm cut down my stomach.

“That was a huge shock and absolutely smashed my confidence because I know the more times this happens, it means I am coming closer to the end, which means less time with my husband and kids.” 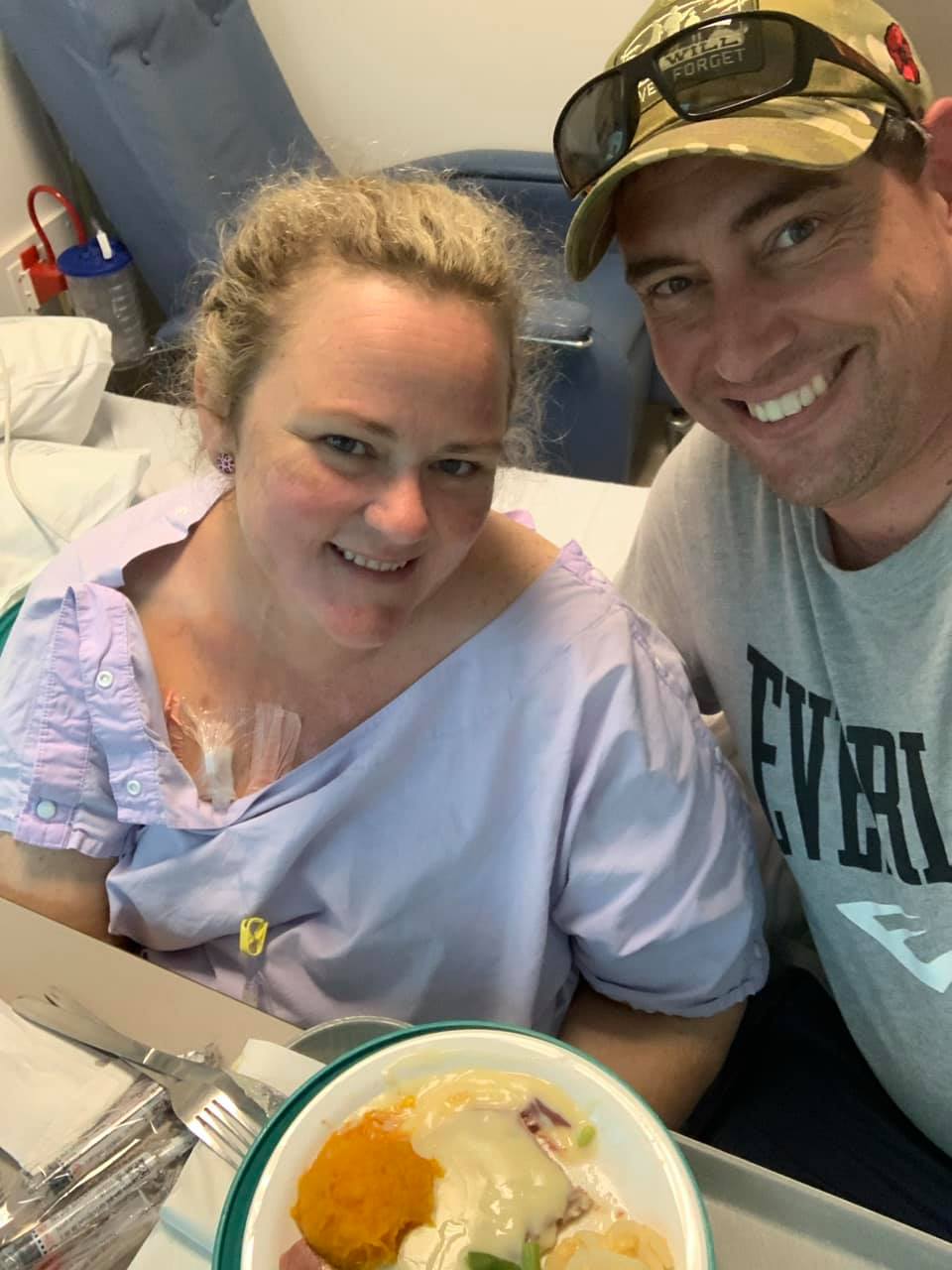 Terri went back on treatment, but it failed. She’s now on another treatment, taking up to 40 tablets a day. She recently received more bad news; another three cancerous tumours found in her bowel.

“So, now we know the treatment isn’t working at all; there’s nothing else I can take. We are coming towards the end of my journey. It’s really hard because my kids are only seven, eight and nine. They’re still so young,” she said.

Australia has the highest melanoma rates in the world. It is expected 16,000 people will be diagnosed with melanoma this year. That means one person is told they have melanoma every 30 minutes.

Melanoma is the most deadly form of skin cancer. It is estimated 1,300 people will die from melanoma in Australia this year.

Her dying mission is to encourage others to get their skin checked regularly by telling her story.

“I didn’t tell my story for the first two and half years because I didn’t want peoples pity. But I have completely changed my focus now,” she said.

“Get a skin check every 12 months, and if something changes, go immediately to your GP or skin specialist. My GP got it wrong, so if you’re not comfortable with the response you get, go to a skin specialist; if you’re still not happy, go to another one.

“Do not stop until you’re satisfied, even if it means having a biopsy. A few stitches is nothing compared to what I am going through,” she said. 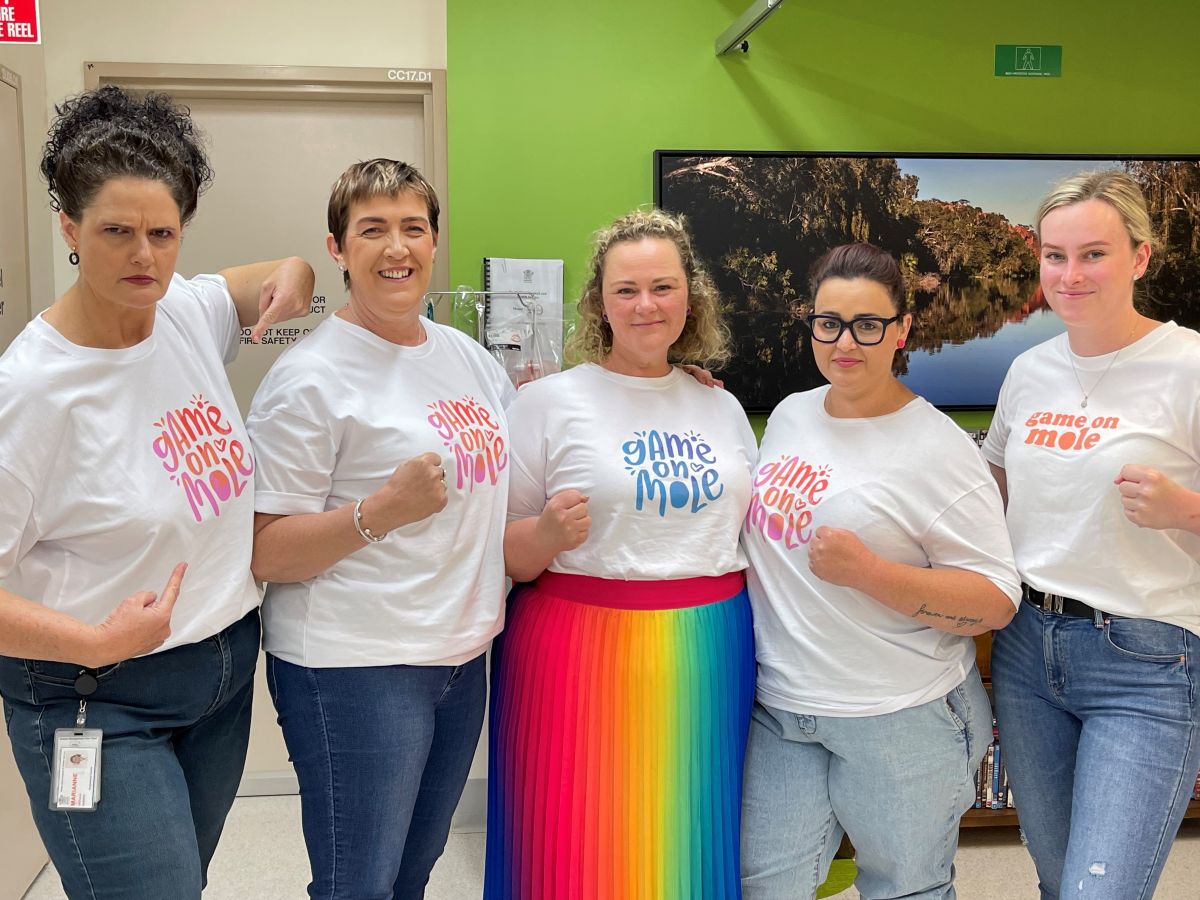 “The Mount Isa community has been incredible, I was sick for a long time, and one of my good friends started a ‘meal train’, where for seven months, meals just turned up at our house every single night at 6pm,” she said.

“The community also fundraised for our kids to have a $3,000 swing set just to bring them a little bit of joy amongst the chaos.

“Even during Christmas time last year, I got sick again. During that difficult time, someone did a toy drive for our kids, and they got so many gifts. This community is beautiful, even the small things like offering to pick the kids up and drop them off.

“I don’t want to die. There have been so many beautiful things out of this. Even sharing my story, people say, ‘I got a skin check because of you’.”

The Mount Isa community also recently fundraised over $28,500 for a family holiday on the Gold Coast for Terri and her family. 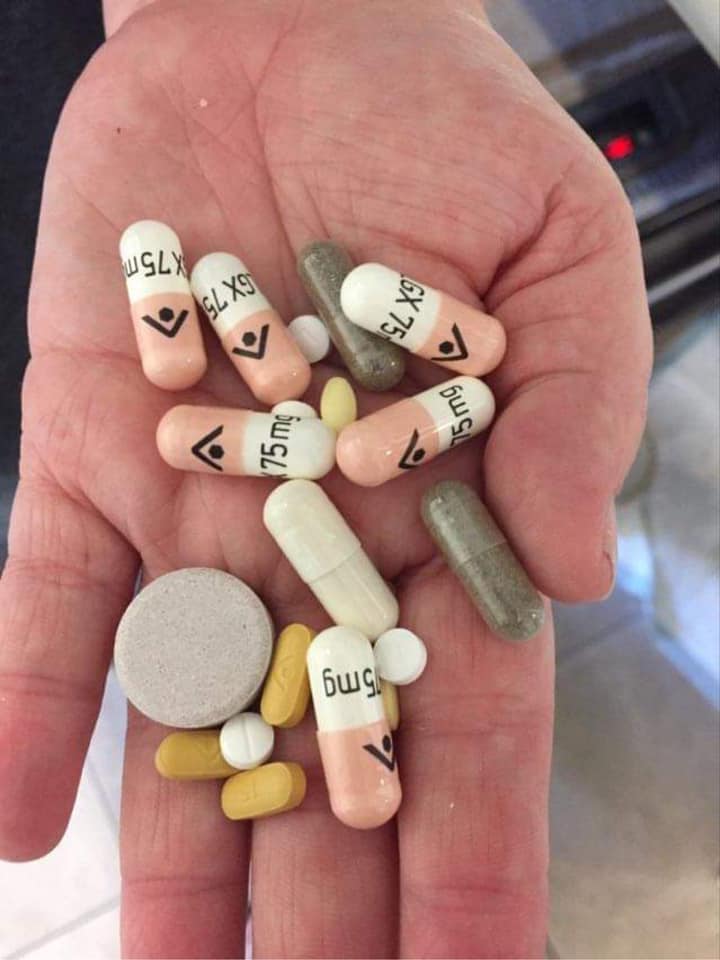 Terri is due to have another operation in October to remove her tumours.

“It’s not very positive at the moment, but we always have hope,” she said.

“My focus now is to make happy memories and instil it in my children always to spread happiness and kindness,” she said.

The North West Hospital and Health Service urges Australians to snap a photo of themselves and use the hashtag #skincheckforterri when they get their skin checked.

The #skincheckforterri hashtag aims to help raise awareness of Terri’s story and the Melanoma Institute of Australia’s goal to reach zero deaths from melanoma this decade.

Where do I get my skin checked in Mount Isa?

A GP can perform a skin check and examine any lesions of concern. They are familiar with your history, can talk to you about risk factors and family history, and treat some skin cancers. They may also refer you to a skin specialist if needed. 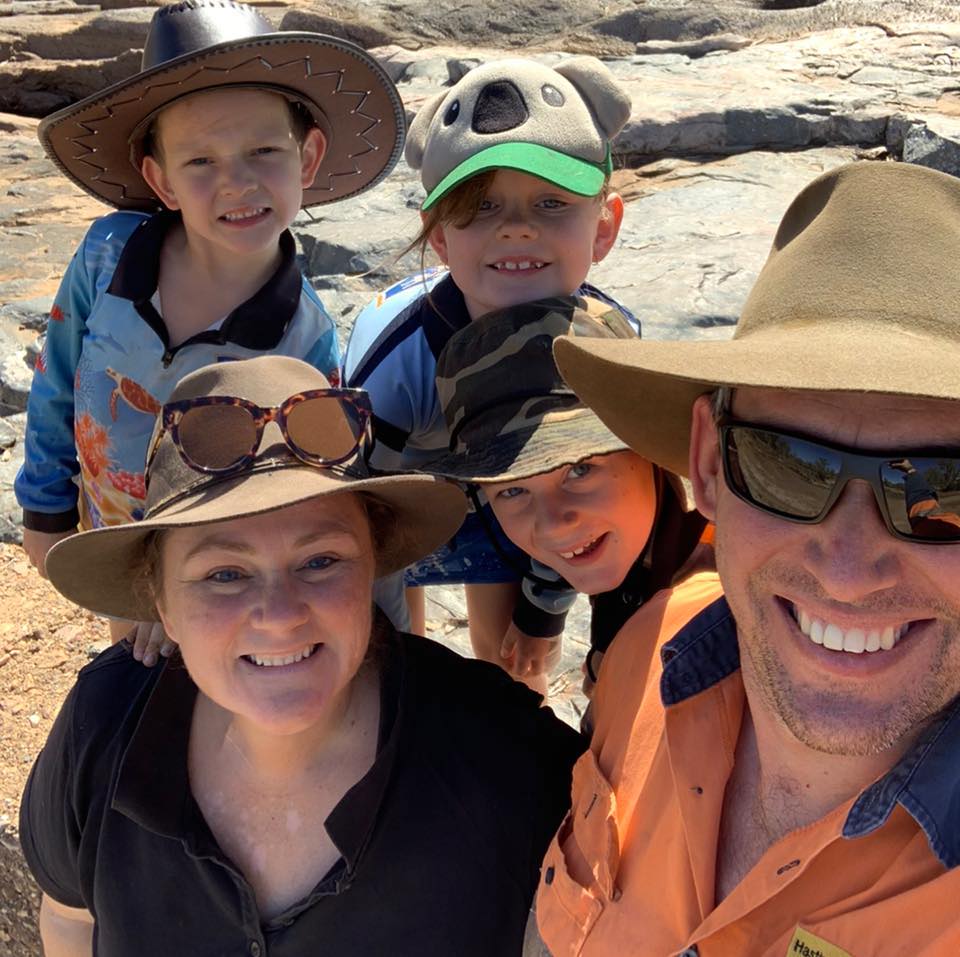 If you’re not satisfied with your GP’s response, please seek a second opinion. Furthermore, you can request a biopsy or a referral to see a skin specialist if you are concerned.

What about a skin specialist?

Look for anything new, changing or unusual on both sun-exposed and sun-protected areas of the body. Melanomas commonly appear on the legs of women, and the number one place they develop on men is the trunk. However, keep in mind that melanomas can arise anywhere on the skin, even in areas where the sun doesn’t shine.

Most moles, brown spots and growths on the skin are harmless – but not always. The ABCDEs can help you detect melanoma. 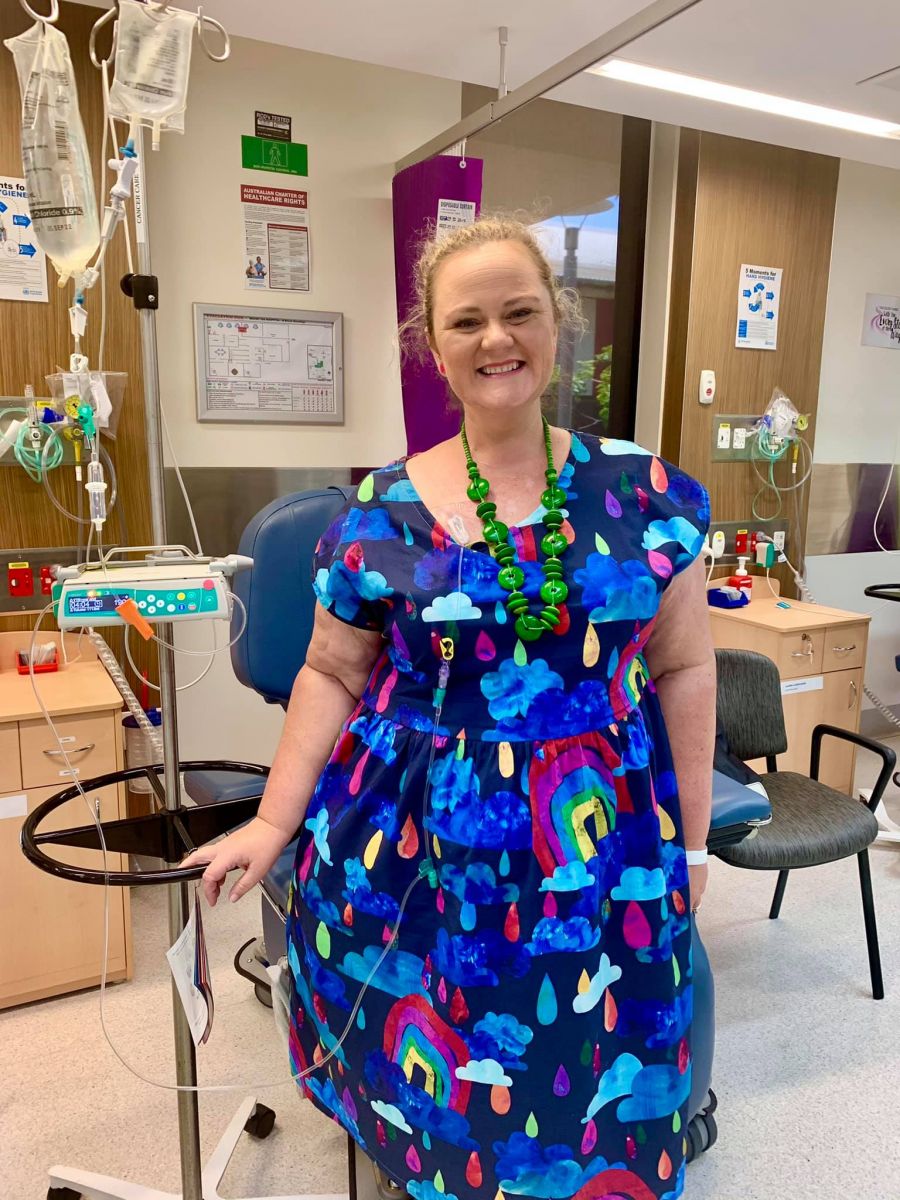