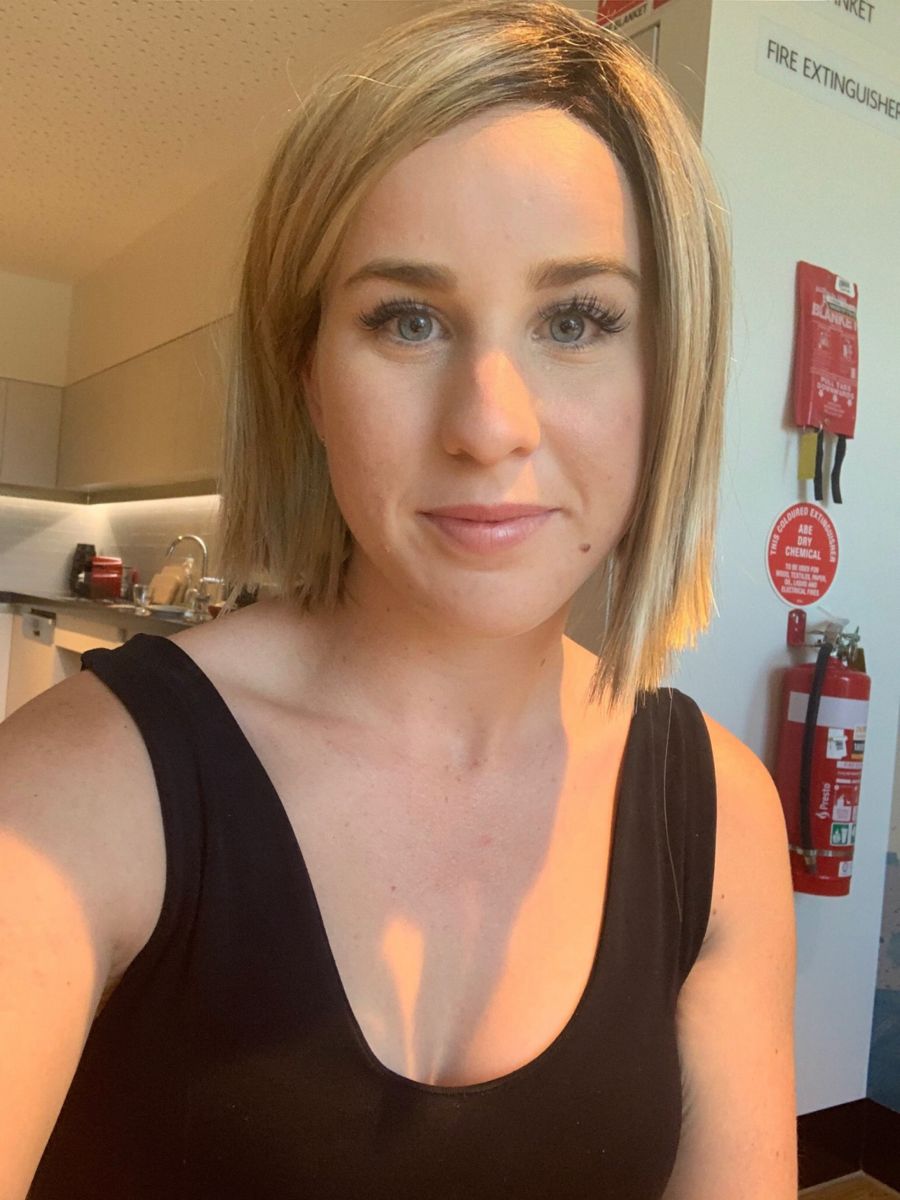 Mount Isa Hospital Midwife who ignored lump, left devastated by rare cancer diagnosis, is urging others to learn from her story

In 2019, Madeleine Beavis was in her graduate year at the Mount Isa Hospital working as a Midwife when she noticed a lump on her leg. Unfazed because her family doesn't have a history of cancer and is young and healthy, she ignored the lump and assumed it would disappear. After a few weeks, the lump didn't disappear; she concluded it must be a blood clot. She ignored the lump until she was on holiday in Townsville and decided to see a GP about it quickly

At first, the GP thought it was a blood clot until further investigation revealed it was much more serious.

"The GP sent me off to have an ultra-sound but was confident I would only need blood thinners and assured me it wouldn't take long, and I could go on my way and enjoy the rest of my trip,” she said.

"I saw a consultant in ED, and it was confirmed I had a blood clot. I was given a script for blood thinners and said an ultra-sound wasn't necessary.

"Before I left, an intern came up to me and said, 'I’ve never seen a blood clot on an ultra-sound, is there any chance you would have the ultra-sound so I can learn?’ I didn’t have the time, but I remembered how helpful everyone was when I was a graduate, so I decided to go ahead with it,” she said.

During the ultra-sound, the clinician turned to Maddy and said, ‘it’s definitely not a blood-clot’.

One doctor introduced himself and explained he was an oncologist at the hospital and specialised in cancer.

“He told me I had a mass in my leg but reassured me there was a one in a million chance of it being cancer. But he continued to say, ‘the problem is it just doesn’t resemble anything else’. 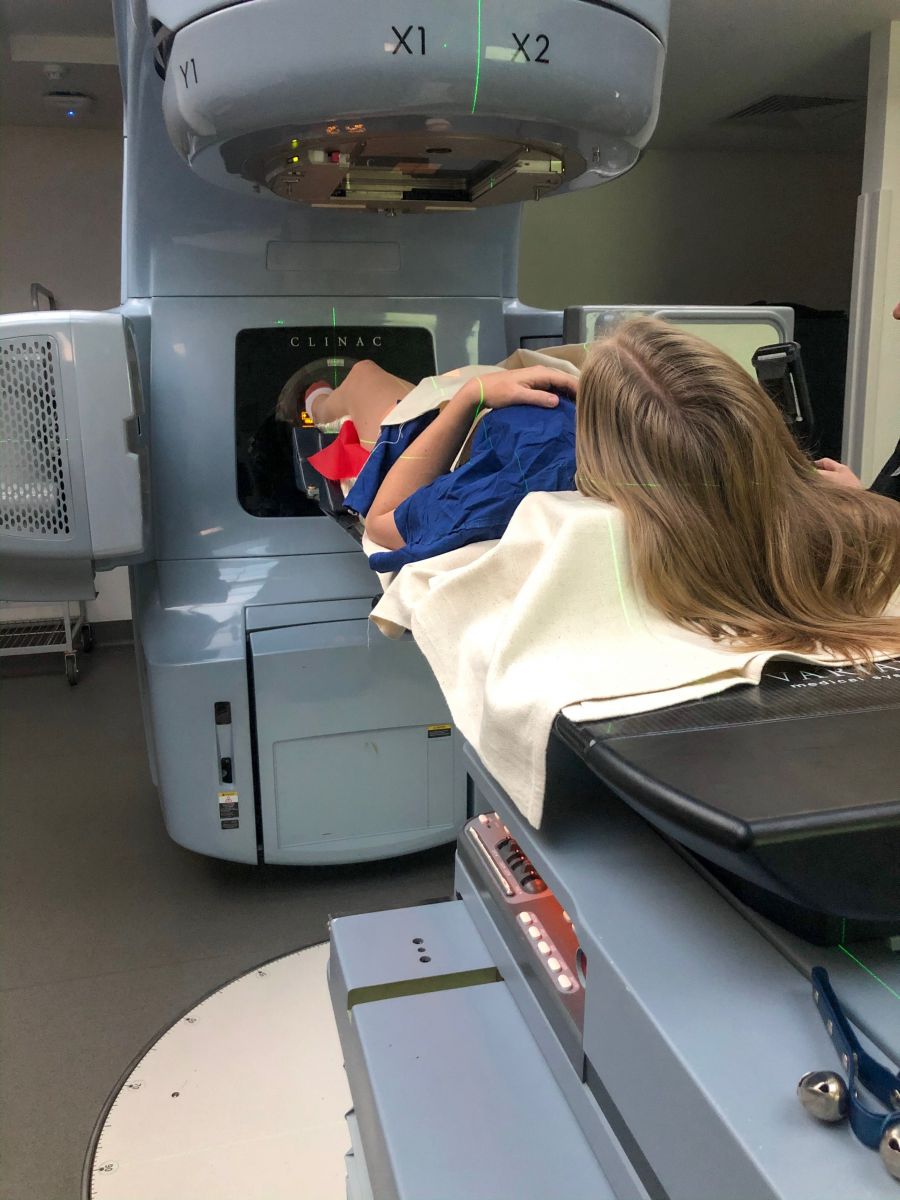 After her MRI came back inconclusive, she had a biopsy sent to Brisbane; they hadn’t seen anything like it. Brisbane forwarded the biopsy onto Melbourne, where Maddy received a phone call from a doctor. As it turns out, she was one in a million after all. The doctor told her she had been diagnosed with stage three Synovial Sarcoma – an aggressive, rare soft tissue cancer.

“Shortly after my diagnosis, I underwent daily radiation for six weeks in Melbourne at the Peter MacCallum Cancer Centre which was like sunburn on steroids.

“Once that was complete, I went on to have surgery on my legs. I had two surgeries; the first one took 11 hours in one day one, then another four-hour surgery on day two in an attempt to remove the cancer.

After ten days in hospital, having multiple muscles removed from her leg, which was later replaced with muscles from her other leg, she ended up with two large scars. Ten days after that, she began to learn how to walk again.

“Shortly after, I was sent home and was told it would take a few weeks for my results to return from pathology.

“Feeling optimistic, I returned to Melbourne with my best friend, also named Maddie and also a midwife at the Mount Isa Hospital. In my mind, everything was going to be better, and I was looking forward to having a girl’s weekend with my best friend.

“Unfortunately, that didn’t go as planned, and my most challenging day was yet to come. I met with my oncologist after he reviewed my scans, and he said, ‘we need to discuss chemotherapy’, and gave me a week to decide,” she said. 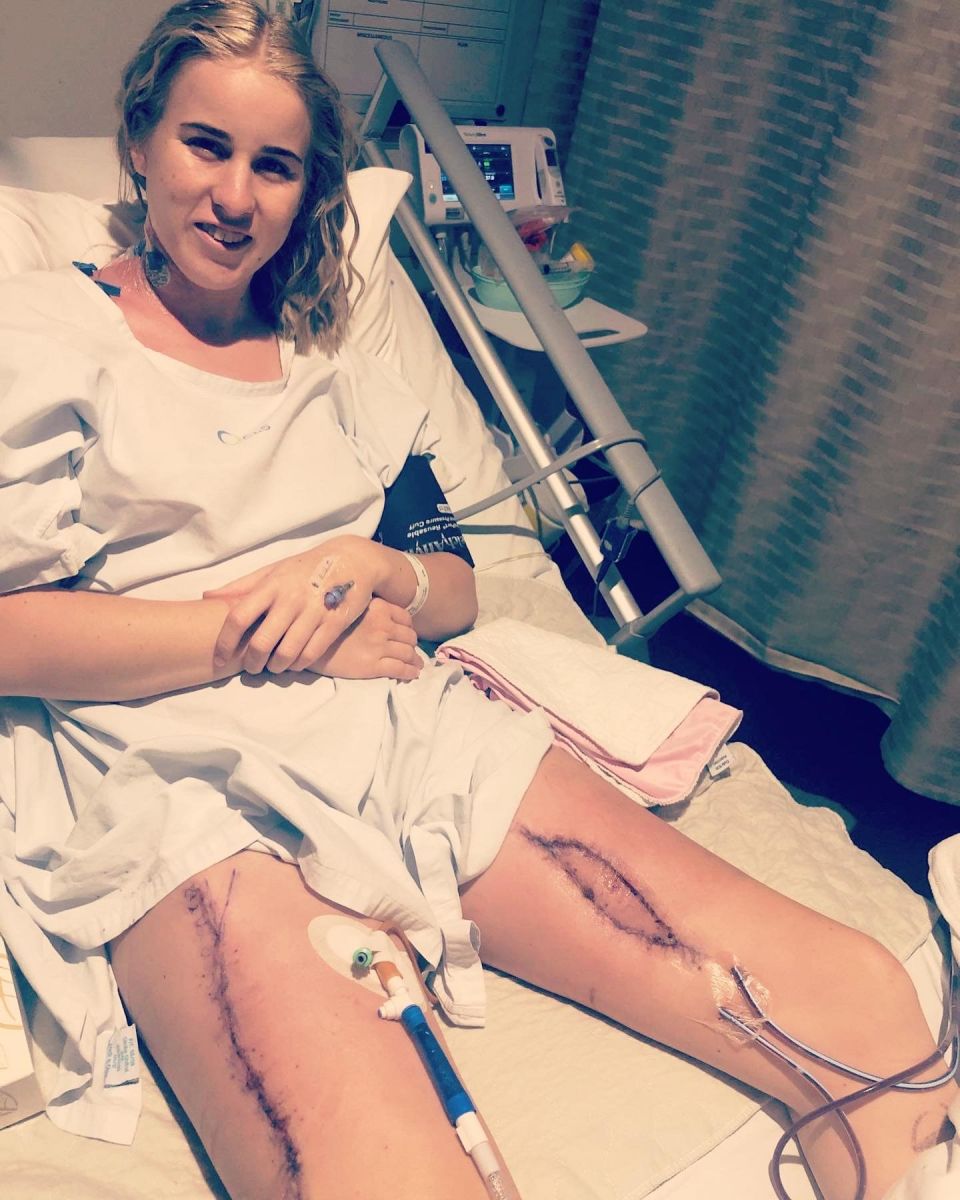 The results came back; radiation had killed spot on 50 per cent of cells in her cancer – which left the oncologist without a preference, leaving Maddie with the ultimate decision of whether to go ahead with chemotherapy or not.

“I was devastated; I just thought I have a week to decide whether or not I want to change my whole life forever,” she said.

Chemotherapy can make it difficult or impossible for survivors to have children. There are options to preserve fertility, but this takes time.

“Chemotherapy takes so much away from your life, and fertility is the biggest one; you don’t always get that back.

“On top of that, I didn’t know if chemotherapy would work because my cancer is so rare; they didn’t have a trialled and tested concoction of chemotherapy to treat my cancer. This left me facing a potentially life-changing question almost entirely alone.

“I didn’t even know if I still had cancer or not, and I just thought, how am I supposed to make this decision with no help. So, I decided I just wanted to give it my all and do everything in my power, just in case. So, I decided to go ahead with chemotherapy, and I was happy with that decision,” she said. 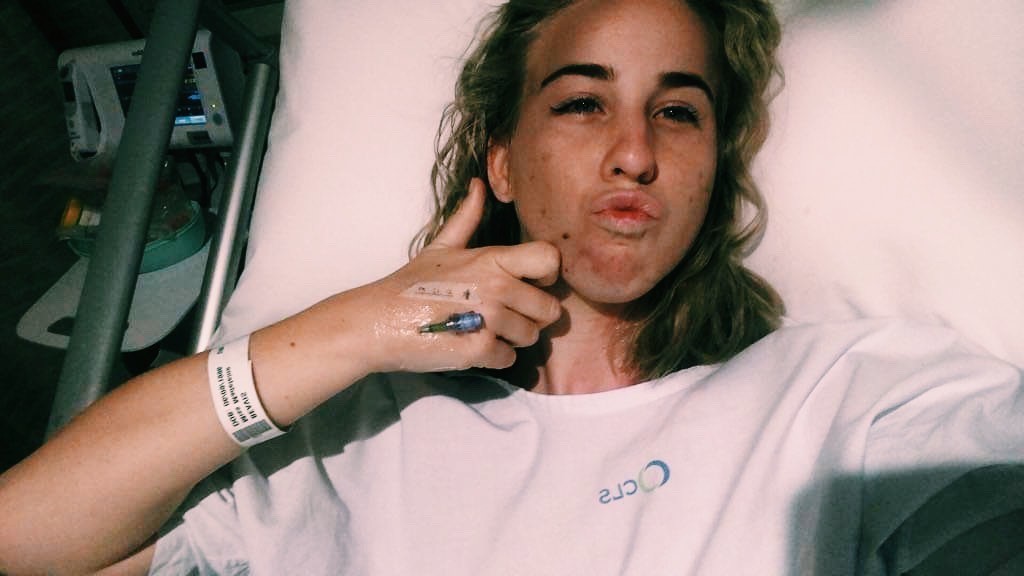 Maddie later went back and saw her oncologist. When the oncologist turned and asked her what she would like to do, Maddie even surprised herself with her reply.

“I still don’t know why I changed my mind so quickly in that room that day either,” she said.

Her oncologist told her there was no right or wrong answer. He said chemotherapy could even cause a different cancer altogether, or she could choose not to have chemotherapy and still have cancer – but there was no way of knowing until they know. 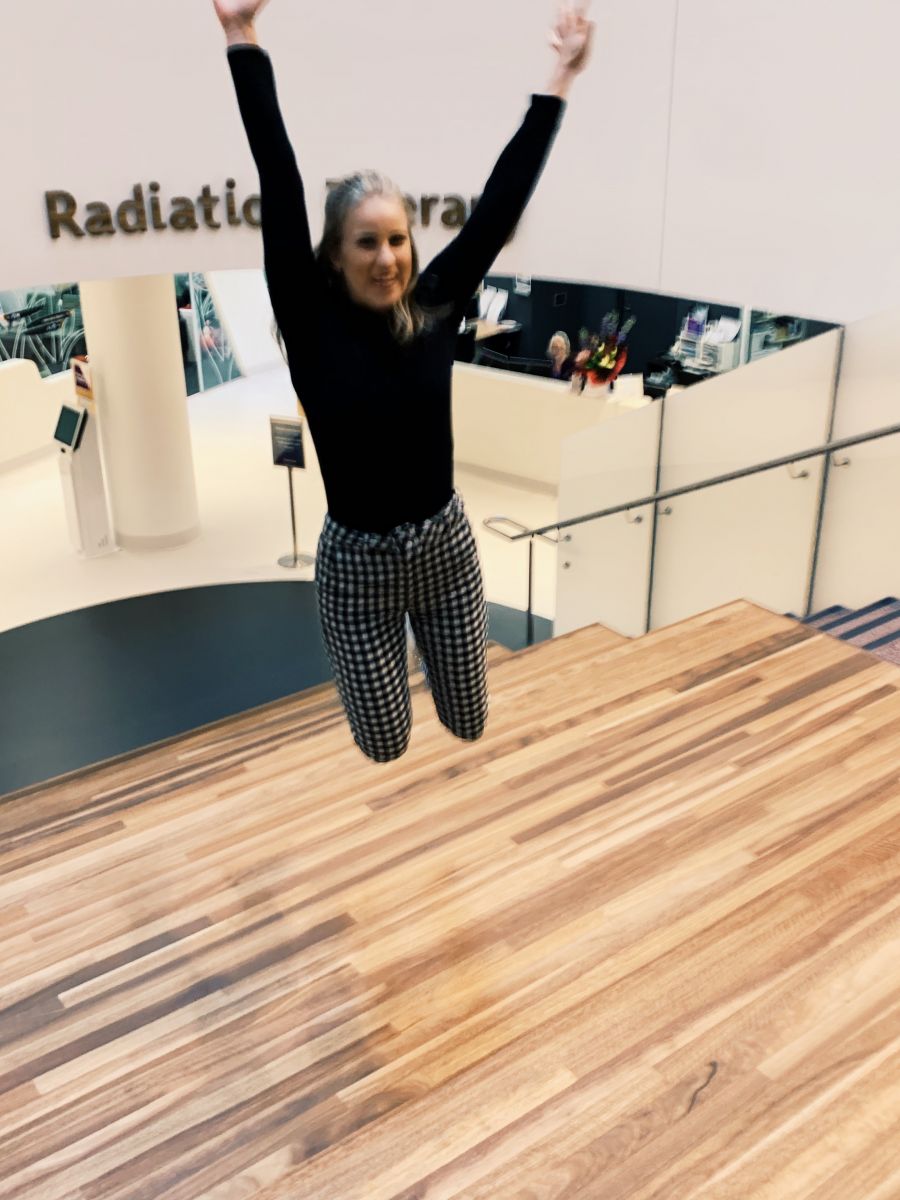 “I’m still in remission, and I’ve been in remission for 16 months now. I have scans every three months, and if after seven years everything still looks good, then I can say I’m cancer-free,” she said.

Maddie says, ‘cancer survivor’ is never a title she wanted, but says she certainly wears it like a badge of honour.

“You realise there is so much more to life; that every minor inconvenience isn’t as inconvenient as you think. Life isn’t as bad as we allow ourselves to think.

“You also learn that we really have no idea what is going on in someone else's life. So, I learned many lessons along the way – and it’s okay for people to have bad days but leave it at that. Nothing is guaranteed; we’re not guaranteed tomorrow.

“I had friends I made in Melbourne that lost their battle with cancer and it made me realise that we don’t have a say. A lot of the time, we don’t get to choose the cards we’re dealt and the one’s we are dealt, we should be grateful for,” she said.

Coming back to work at the Mount Isa Hospital as a midwife is what Maddie looked forward to doing the most.

“I’m back doing my favourite thing in the world, and it’s the best thing ever.

“I take things seriously when patients talk to me about their concerns. Women will bring up things that might seem really small to me or to someone else – but if someone is bringing it up, then they’re worried about something, and I always have that in the back of my mind. When people are concerned, you need to trust them, and I take that into every appointment,” she said. 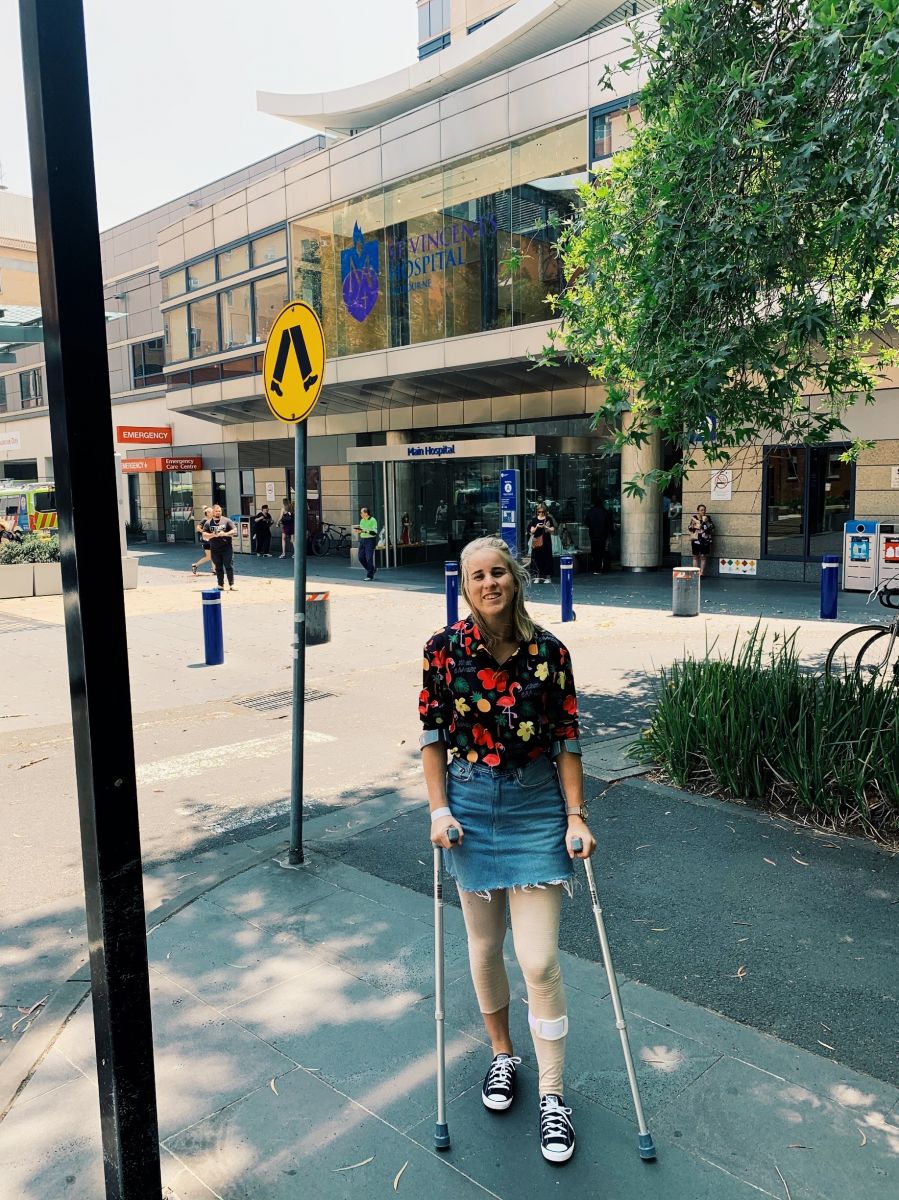